Shurden Lectures 2018: Follow your conscience and raise your voice

What does the First Amendment mean for Americans today? How can we continue our country’s commitment to religious liberty?

Dr. Charles C. Haynes spoke on the campuses of Mercer University to shed light on these questions and more during the 2018 Walter B. and Kay W. Shurden Lectures on Religious Liberty and Separation of Church and State.

The founding director of the Religious Freedom Center of the Newseum Institute, Haynes has been a longtime collaborator with the Baptist Joint Committee and a national leader in discussions on the role of religion in public life.
He began by noting the current climate in our culture, with growing harassment of religious minorities in the United States.

“At this defining moment in American history, we the people face a stark and momentous choice,” he told the crowd during his first lecture on the campus of Mercer University’s McAfee School of Theology in Atlanta.

“Will we reaffirm and renew our commitment to the guiding principles of religious liberty that enable Americans to realize the dream of ‘E Pluribus Unum’ – out of many, one? Or will we succumb to forces of intolerance and hate that are the root cause of religious and ethnic division, conflict and violence in this country and across the globe?”

Haynes shared stories of the first two arrivals of Jewish families seeking a safe haven from persecution in what is now the United States.

First, in 1654, a boat containing Jewish families landed in the Dutch colony of New Amsterdam (now New York), but the colony’s governor considered Jews to be “a repugnant and disgusting” race. While he allowed them to remain (mostly for economic reasons), he did succeed in denying the families basic rights, including the right to build a synagogue and worship openly and freely.

“This hostile reception is rooted in a distorted reading of Scripture that supports a ‘Christian nation,’ by which they mean their version of Christianity married to the state,” Haynes said. “In such a society, one group imposes their faith through government and, at best, tolerates others to live there.”

Four years later, another vessel carrying Jewish families landed. This time, the boat landed in Rhode Island, where the families were told they were free to practice their faith openly and freely as citizens of the colony. “Jews had not heard this anywhere else in Christendom,” Haynes said.

This reception for the Jewish families was due largely to the religious vision of Roger Williams, the founder of Rhode Island and “an eccentric Puritan minister.” He’s also the founder of the First Baptist Church in America, even though he was only a Baptist for about six months (which, as Haynes pointed out, was a long time for Williams).

Williams modeled core principles and virtues, according to Haynes, that are necessary to sustain any experiment in religious liberty, including upholding an absolute commitment to “soul liberty” as an inherent right for all.

“All are free to persuade others to their truth, but no one — not even the founder of the colony — may use the engine of government to promote one religion over another,” Haynes explained.

Williams also practiced civility, which Haynes said is an essential virtue in a democratic society. “Conflict and debate are vital to democracy, but how we debate, not only what we debate, is critical.”

In his second lecture, Haynes expanded on what it means to continue embracing liberty of conscience in our country. Speaking to students on the campus of Mercer University in Macon, he shared the “secret sauce of social change” in America: putting our First Amendment freedoms to work.

Highlighting the impact of the survivors of the shooting at Marjory Stoneman Douglas High School in Parkland, Florida, Haynes said the students’ message is powerful: it is a call to conscience shaped by witnessing the deaths of friends and classmates. While the gun-control debate is not a religious issue, Haynes said it is a cause of conscience for many of those students.

“What we call the religion clauses of the First Amendment — no establishment and free exercise — are better named the ‘religious freedom’ or ‘liberty of conscience’ clauses,” he said, explaining that they create a civic framework that allows Americans to debate ideas, negotiate differences and, where possible, find a common vision.

While three-fourths of the world’s people live in places with high restrictions on liberty of conscience, Haynes noted that denying people the right to follow their God or deepest convictions “is the leading cause of conflict and violence throughout the world.”

He shared examples from American history of students of conscience standing up for justice and freedom, such as Mary Beth Tinker who wore a black arm band to high school in 1965 to protest the Vietnam War. While her family received threats, her act of conscience led to a 1969 Supreme Court decision establishing that students don’t leave their constitutional rights at the schoolhouse door.

“Far from being too young to make a difference, students who follow their conscience have always been and are now our nation’s best hope for changing what is wrong and unjust,” Haynes said.

Haynes shared a First Amendment vision for religious liberty in public life when he spoke on the campus of Mercer University’s Walter F. George School of Law.

“The First Amendment provides the civic framework — ground rules, if you will — that can bring us together and help us find common ground,” he said.

Haynes shared his strong conviction that the future of the American experiment in freedom requires getting religion and religious liberty right in the public square.

For nearly 30 years, Haynes has worked on the role of religion in public schools with local school districts, as well as with religious and civil liberties organizations. Much of his work led to the creation of consensus guidelines on religion in the public schools.

During his lecture, Haynes reminded everyone that, under current law, students have robust rights, including the right to pray in public schools — alone or in groups — as long as the activity does not disrupt the school or infringe on the rights of others; the right to share their faith; the right to express personal religious views in class or as part of a written assignment as long as the speech is relevant to the discussion and meets the academic requirements; the right to form student-led clubs in secondary schools if the school allows other non-curriculum-related clubs; and more.

“When religious liberty principles are properly applied, schools are able to go beyond the failed policies and practices that either imposed religion or banished religion — and create what I call a ‘First Amendment public school,’” he said.
Nevertheless, he noted that conflicts remain and new clashes keep rising.

“If we have any hope of living with our deepest differences going forward — especially our religious differences — we must do the hard work now of renewing our shared commitment to the core civic principles and ideals that bind us together as a people,” he said.

Throughout his presentations, Haynes reminded students that American citizens are “heirs to the boldest and most successful experiment in liberty of conscience the world has ever seen.”

Haynes also provided an inspirational charge to the next generation: “Follow your conscience, raise your voice, petition your government — work to create a more just, free and safe society.”

In 2019, the Shurden Lectures will be held March 26-27 on the campus of Central Baptist Theological Seminary in Shawnee, Kansas.

Dr. Walter B. and Dr. Kay W. Shurden endowed the annual lecture series in 2004. It is held at Mercer every three years and at other colleges, universities or seminaries the other years.

For more information, visit our website page at BJConline.org/ShurdenLectures. Scroll down to see videos of all three lectures. 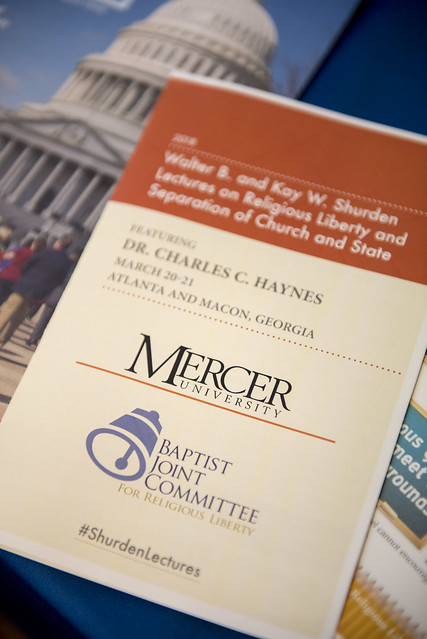 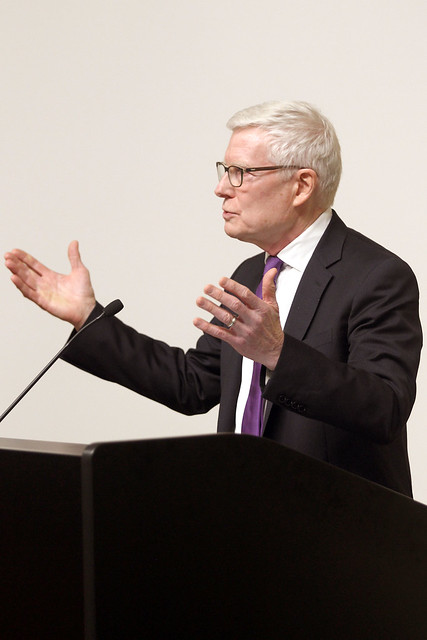 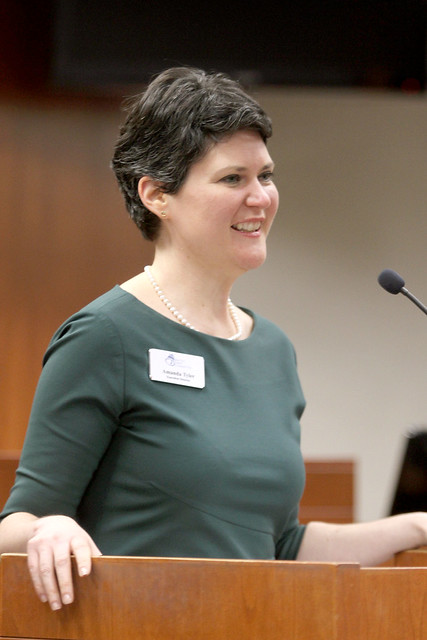