With Congress
In the Courts
Learn with Us
Make a Difference Come join us! We need your help in guarding the constitutional protection of religious liberty for all people.

BJC works with Congress and the courts, but it will take all of us to successfully stand up for this freedom. We’ve got tools, trainings, and resources to show you how to use your voice powerfully — whether it’s engaging on social media, signing a letter to Congress, reaching out to lawmakers or taking action in your community. We’re in this together.

Four ways to raise your voice

Join us in rejecting the damaging political ideology of “Christian nationalism,” which implies that to be a good American, you must be a good Christian. Conflating religious authority with political authority approaches idolatry, distorts our faith and can justify oppression of minority groups. BJC supports the bipartisan Save Oak Flat Act. Chi’chil Bildagoteel, loosely translated as “Oak Flat” in English, is a sacred site for the San Carlos Apache Tribe and other tribes. It is currently at risk of being transferred to a foreign mining operation, which plans to use the highly destructive block-cave mining method that will result in the permanent destruction of Oak Flat.

Want to get involved? Sign this letter to Congress to show your support. You can also share why you think this fight for Indigenous sacred ground is important. Now is the time to come alongside our Indigenous neighbors and join the effort to #SaveOakFlat. Visit BJConline.org/SaveOakFlat for more. 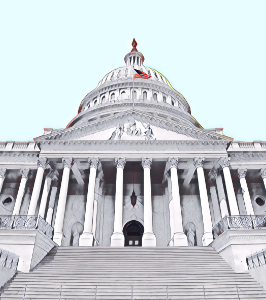 BJC supports the NO BAN Act as one way to fight against the anti-Muslim bigotry the Muslim and African travel ban represented and perpetuated.  BJC has been an outspoken critic of the travel ban since it began in 2017 when President Trump banned migration from seven majority-Muslim countries, temporarily shut down refugee resettlement and sought to prioritize Christian refugees.

On his first day in office, President Biden reversed the Muslim and African travel ban in what BJC called a “victory for faith freedom.” We celebrate that important step, but we still have work to do – passing the NO BAN Act will ensure that a future administration can’t impose a similar ban.

During the 117th Congress, the U.S. House of Representatives passed the bipartisan NO BAN Act (April 21, 2021). The bill awaits action in the Senate. Ask your Senator to support the NO BAN Act. Support religious freedom by calling for the global repeal of blasphemy and apostasy laws, which stifle religious expression and undermine human rights. In December 2020, bipartisan resolutions in the House and Senate (H.Res. 512 and S.Res. 458) passed, calling for the repeal of those laws and calling for the State Department and the administration to prioritize the repeal of such laws in foreign policy. Read our testimony to Congress.

BJC supported both measures, and the BJC Advocacy Team contacted their lawmakers about the importance of this issue. These laws still exist in more than 80 countries, so the work continues as we stand with our global neighbors seeking faith freedom for all. Learn why it’s so important to keep the protections of the Johnson Amendment for all houses of worship, and add your voice by signing this letter.

Join us on social media

Make a difference online! Your voice matters to your community and your member of Congress.  Use your favorite social media platform to talk about why religious liberty matters. Share your personal story, post photos of interfaith moments, write about the importance of religious diversity at school or get a conversation going about church-state issues in the news.  And, when you’re taking a stand, don’t forget to tag your elected officials.

Keep us in the loop by using our handle @BJConthehill #FaithFreedomForAll.

Use these tools to take action and lead the conversation See what it’s like to attend a BJC Advocacy Training Tell us your religious liberty stories

In big and small ways, we see how religious liberty enriches our lives every day. Tell us what you see, and we may share your story on social media or in our magazine!

Thank you for joining us in fighting for a future that ensures religious liberty for all.