BJC Fellows across the country are actively standing up for our first freedom in their congregations, communities and careers. At this year’s Religious Liberty Council (RLC) Luncheon, hundreds of religious liberty supporters gathered to hear from members of each class of BJC Fellows, who shared their individual journeys and how they’re putting the BJC Fellows Program’s teachings to use in their everyday settings.

Three BJC Fellows from the class of 2017 took the stage for a panel discussion moderated by the Rev. Dr. George Mason, pastor of Wilshire Baptist Church in Dallas. Joining him were the Rev. Aurelia Davila Pratt, lead pastor of the Peace of Christ Church in Round Rock, Texas; Sofi Hersher, assistant communications director of the Religious Action Center of Reform Judaism in Washington, D.C.; and the Rev. Corey Mitchell, a speech-language pathologist in Raleigh, North Carolina, and associate minister for children and youth at the Rock Spring Missionary Baptist Church in Creedmoor, North Carolina.

Since 2015, the Baptist Joint Committee for Religious Liberty has selected 10 BJC Fellows each year, bringing them to Colonial Williamsburg, Virginia, for an intensive and interactive seminar. Members of the BJC staff, alongside other scholars and historical interpreters, deepen the Fellows’ historical, legal and theological understandings of religious liberty, thus equipping these young professionals to take action on religious liberty issues in their own communities and contexts.

Pratt shared that she was drawn to the program because of the opportunity to increase her awareness of religious liberty and to develop advocacy skills. She said it was a feeling of despair after the 2016 election that led her to search for ways to become more civically minded. “I wanted to take my frustration and turn it into productive civic action. It seemed like the right time for me to try to be a part of the Fellows program,” she said. “The program helped me further my passion, gifts and calling in ministry.”

In Mitchell’s ministry work with children, he said his knowledge from the program has helped him communicate “tolerance” as well as “how to be accepting of peers who have a different faith background.” He reiterated that this concept can be especially difficult for children to wrap their heads around if they have met few people who differ from them – theologically or otherwise.

Hersher, who is Jewish and the first non-Christian BJC Fellow, said that, among the many things she learned during the BJC Fellows Seminar, is “how complicated it is to be Baptist,” to which the room responded with raucous laughter. The BJC has a long history of working with the Jewish community on matters of religious liberty, and Mason recognized this relationship, adding, “When we think about minority faiths, there’s often been a shared experience between early Baptists and Jews in this country.”

Pratt has seen the impact of the BJC Fellows Program on her congregation’s efforts in interfaith community building. “Interfaith work at its core is just about getting to know your neighbor,” she said. “As Christians, we’re called to love our neighbor, and you can’t love someone if you don’t know them.”

Pratt also pointed out that religious liberty is something many faith-based persons can get behind. “Religious liberty becomes a shared value, and our goal then becomes to preserve and protect that for all, whether you worship a different god from them or no god at all.”

Mitchell added that “a little love can go a long way,” urging that much more can be accomplished by loving each other than the opposite. Plus, he added, “Religious liberty is the responsibility of everyone in this room.”

Hersher agreed with both Mitchell and Pratt, noting that “the future of religious liberty is strongest in partnership,” referring to her own partnership with the BJC as a “beautiful” one. She offered a historical lens as well, reminding everyone that religious liberty can be a shared experience that is — unfortunately — often rooted in religious persecution. “Everyone in this room at some time and at some place on earth is a part of religion that at one point in history has been part of a majority and part of a minority,” she said.

Pratt echoed Hersher’s sentiment. “Religious liberty is not automatic,” she said. “We have to work together to preserve it, whether through advocacy in the community, or by becoming a BJC Fellow, or giving to organizations like the BJC.”

After the panel concluded, eight other BJC Fellows took to the microphones to share their insights and experiences as advocates.

“Being a BJC Fellow means having the tools to model best practices as a religious voice in the public square,” said the Rev. Lauren McDuffie of Morehead, Kentucky. “I’m grateful for the education I received as a BJC Fellow that has prepared me to help guide conversations in the midst of difference and to advocate for those whose voices are sometimes unintentionally silenced in the interest of easy answers.”

The Rev. Megan Pike, a 2016 BJC Fellow living in Little Rock, Arkansas, said her advocacy includes the nonprofit sector. “I really see the value of preserving the Johnson Amendment,” she said, as both a minister and a member of a local nonprofit board. “Messing with the Johnson Amendment would be infiltrating our nonprofit organizations with partisan politics, which makes our organizational missions vulnerable to external pressure and could be divisive in our congregations.”

“I am sensitive to my own religious privilege,” said the Rev. Kyle Tubbs, a 2015 BJC Fellow based in Decatur, Georgia. “I strive to be a religious liberty advocate for my inter-religious neighbors, remembering that Baptists, at one time, were religious minorities, too.”

Incoming BJC Fellows — members of the class of 2018 — also shared their excitement about what lies ahead.

The Rev. Brent Newberry of Worcester, Massachusetts, expressed interest in how the BJC Fellows program can help him better explore his own inter-religious community.

The Rev. Claire Hein Blanton of Houston, Texas, said she was “excited about the opportunity” to translate her doctoral studies in political theology to “everyday life,” and “gain a vocabulary” that will help her “further the mission of religious liberty.”

The Rev. Annette Owen, a pastor of a small congregation in the Chicago suburbs, said she is looking forward to having what she learns at the BJC Fellows Seminar “empower the congregation to see themselves as agents of change.”

To close the luncheon, the Rev. Alyssa Aldape, a 2015 BJC Fellow and pastor in Washington D.C., told the audience, “We are called to be in this work together. Let’s be do-ers, together.”

“Our future is in the excellent hands of the BJC Fellows,” said BJC Executive Director Amanda Tyler, commending the next generation of religious liberty advocates during her remarks. She also shared an update on how many advocates from across the theological spectrum have recently worked together to make a difference.

“I can report to you that, thanks to your effort and involvement, our laws still contain protections that keep political leaders and candidates from trying to co-opt our houses of worship and other 501(c)(3) nonprofits for their own campaign purposes,” she said. “Over the past year, you have been an integral part in our success to keep the Johnson Amendment intact: to keep our nonprofits nonpartisan and to keep partisan electioneering out of our tax-exempt sanctuaries.”

Tyler thanked all who have reached out to their members of Congress, written letters and op-eds, added their name to Faith-Voices.org (which is still accepting signatures), and raised their voices in other ways to push back against proposed changes to the law. She reminded everyone that the efforts are ongoing, and “the fight continues.”

As the individual donor organization of the Baptist Joint Committee, the Religious Liberty Council is one of the 15 supporting bodies of the BJC. All BJC donors are members of the RLC, and the luncheon included the election of RLC officers and RLC representatives to the BJC Board of Directors.

Lynn Brinkley of North Carolina and the Rev. Andrew Daugherty of Colorado were re-elected to new three-year terms serving as RLC representatives on the board, and Gary Walker of Florida and the Rev. Elizabeth Mangham Lott of Louisiana were elected to serve for their first three-year terms. Tyler thanked the Rev. Tambi Swiney of Tennessee and Aubrey Ducker of Florida for their two terms of service as RLC representatives.

The annual Religious Liberty Council Luncheon is held in conjunction with the Cooperative Baptist Fellowship General Assembly each summer, and it is open to anyone who wants to attend. Next year’s event will be in Birmingham, Alabama. Tickets will be available for purchase in spring 2019.

To see more scenes from this year’s event and to watch a video of the entire program, visit BJConline.org/Luncheon. You can also search the hashtag #RLCLunch on social media for additional event coverage or listen to a podcast of the program. View a photo album on our Facebook page.

This article is from the July/August 2018 Report from the Capital. The entire edition will be available online in mid-August.

Inspired by these new leaders? Show your support for religious liberty by connecting with the BJC Fellows Program.

Invite a BJC Fellow in your region to speak at your church or in your community about religious liberty. Contact Charles Watson Jr., associate director of education, for details at [email protected]

BJC Fellows throughout the country:

Click here to view this directory as a PDF

Don’t see a BJC Fellow in your area? Know a person perfect for our program? Suggest they apply! Applications will be available in December at BJConline.org/Fellows.

3. Donate to the BJC Fellows Program

Your contribution ensures the future of religious liberty advocates. Make your gift: BJConline.org/Donate. 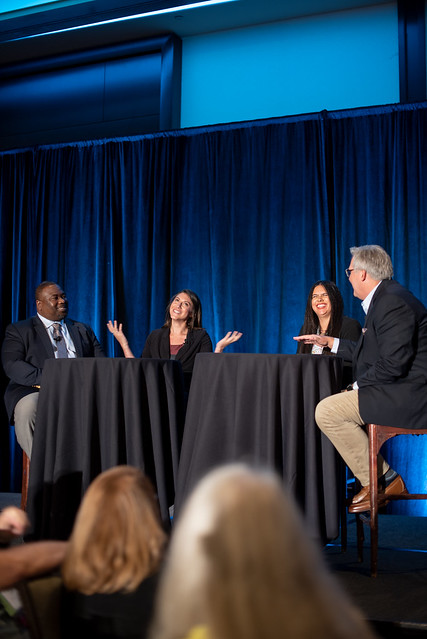