Amanda and Holly discuss how the merging of American and Christian identities impacts discussions on gun policy and shuts down some debate.

The United States has a distinctive and increasingly destructive gun culture. In this episode, Amanda and Holly look at how embracing Christian nationalism correlates to opinions on gun control and why conversations about gun reform become more difficult when “God-given rights” are invoked and government-sponsored prayer is advanced as a policy solution after violence. Dive into this nuanced, complicated and emotional issue as our country reels from recent mass shootings and searches for policy solutions.

Segment 1: What is it about Christian nationalism that drives such strong opposition to gun reform? (starting at 00:43)

We’ve discussed manifestations of Christian nationalism this season in several episodes, including episode 6, episode 12, and episode 18.

Visit ChristiansAgainstChristianNationalism.org for a statement to sign and additional resources on Christian nationalism.

Amanda and Holly mentioned our 10-part podcast series on the dangers of Christian nationalism and corresponding discussion guide. You can listen to each episode individually at ChristiansAgainstChristianNationalism.org/podcasts, or you can visit our “BJC Podcast” feed and scroll back to episodes from 2019.

The podcast discussion guide is also available at this link.

Amanda mentioned Dr. Samuel Perry and Dr. Andrew Whitehead’s book Taking America Back for God: Christian Nationalism in the United States, which uses a model to identify and explain Chrisitan nationalism and its impact on a variety of public policy issues and debates. You can see a quick overview in this one-page document.

Dr. Samuel Perry and Dr. Philip Gorski have a new book out titled The Flag and the Cross: White Christian Nationalism and the Threat to American Democracy.

Dr. Perry’s recent article for TIME magazine is School Shootings Confirm That Guns Are the Religion of the Right

Amanda mentioned this article by David French: Against Gun Idolatry. She also referred to this episode of the Good Faith podcast, with David French and Curtis Chang: Gun Violence, Gun Rights & Gun Idolatry.

Segment 2: How do we see Christian nationalism impacting the debate on guns? (starting at 18:00)

Amanda and Holly mentioned this article from Australia by Nicola Heath: Where do religious groups in the US stand on gun control? 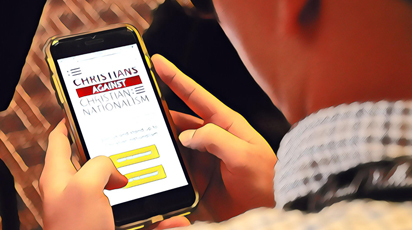